I thought we should probably begin this section with a brief explanation. Those of you who know me, realize what a challenge that is.

I differentiate Reproductions from Fakes for one simple reason. Reproductions are usually not meant to deceive. A Reproduction is something made to look like an original. Sometimes even produced by the original company using the original molds. Most of the time I will refer to this as a Re-release. I will still cover it under Reproductions.  Think Fire King Jade-ite. I’ll post more on this lovely stuff later. Think Fiesta. Same pattern, different colors.

Sometimes the Reproduction is just to meet demand for the original “look”. Not everyone is a collector, and if you just want the look, but not the price, reproductions are the thing! Sometimes it is an attempt to bring back something wonderful. Think Madrid depression glass by Federal. They brought it back as Recollection in 1976, in different colors and clearly marked with “76” in the pattern. Didn’t work out the way they had planned….Federal closed in 1979. Indiana Glass later acquired the molds, removed the “76” mark, and made the pattern, creating confusion among collectors today. Now that one I might have to cogitate before deciding which section to put it in…. 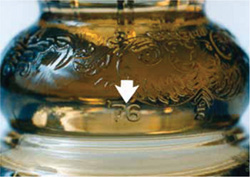 There is an excellent article on this very topic at Ruby Lane, and it is Mark Chervenka I have to thank for this very clear photo.

Sometimes the re-release is to bring an old favorite into the modern day. When Fiesta re-released their much loved line, they did so through up-market retailers like Gottschalk’s and Macy’s in colors more suited to the current fashion. The Lavender color released exclusively through Macy’s now commands prices as high or higher than the vintage Fiesta!

do you think it’s worth the price?

Sometimes a Reproduction is meant to make something more readily available. Think art prints. They are authorized releases, generally clearly identified as prints and usually easily differentiated from an original. Some of this gets a little dicey when texturing meant to look like brush strokes is used, but we’ll cover that too.

The bottom line for this court is this. If it is something made to look like something older, but clearly identified as different from the original, and not meant to deceive, you will find it here. It is important to use reputable dealers and educate yourself a bit to avoid being fooled. Sometimes even reputable dealers have been confused by some reproductions. If you know what you’re looking at, most reputable dealers are willing to do a little more research into the item, and may contact you first after that research is done. I know that when we have questions at Royal Scotsman, we will usually pull the item until we can say with certainty what we have. We have had some items we did not know about, and we made no claims as to authenticity. When we don’t know, we say so. If you aren’t sure, don’t buy it……unless you just love it. Then it really doesn’t matter if it’s a reproduction or not. All that matters in that case is, do you think it’s worth the price?

Tell me Royal Followers, what confuses you? What Reproductions have you encountered? What would you like to see first? Let me know, I’ll get to work!