I have a collection of mudmen. In several sizes. And I have a dilemma. Do I keep looking for mudmen to complete at least one collection, or start to divest myself of the sizes that are the least complete? What does “complete” mean when it comes to mudmen? And what happens to my collection when I’m gone? I’m singing a song well known to many of you – “my kids don’t like my stuff.” This means that my collection has meaning only to me. Of course that also means it meets the first criteria for collecting. I just love the darn things. They make me smile.

So how do I decide when enough is enough? When the display space is filled to capacity? It already is. Now they’ve started to migrate to other parts of the room. What is it that makes them so darned appealing? Well really – just look at those faces! 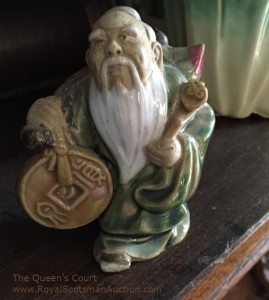 The one who started it all 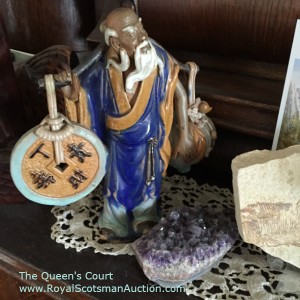 Many of the mudmen were meant to depict the eight immortals. The picture below comes from David K. Jordan, Professor Emeritus of Anthropology at The University of California San Diego. He explains each of the immortals far better than I can, so check out his really great website! 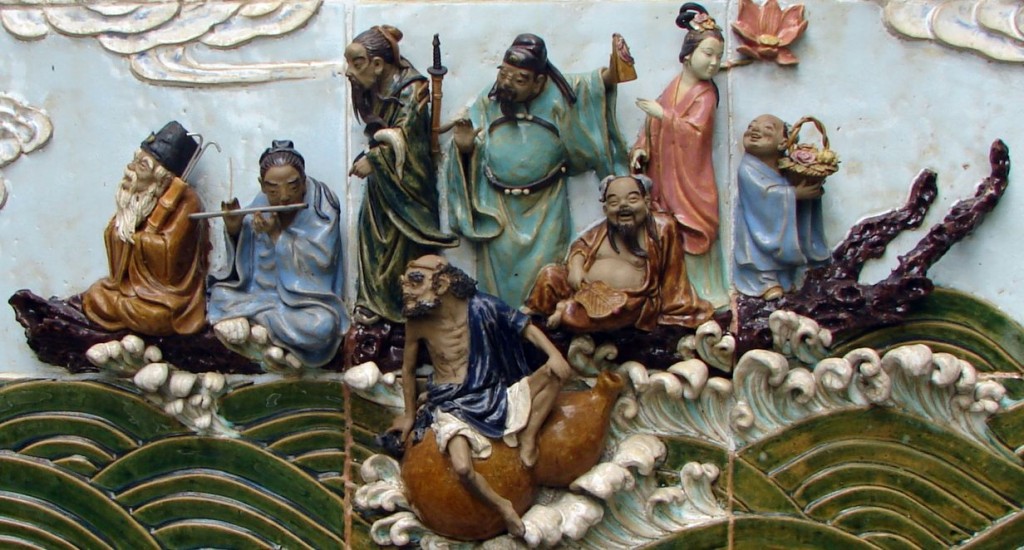 Mudmen date back as far as the Tang Dynasty (618-907 AD) when they were used to create a sense of realism in Bonsai landscapes, but most of the mudmen in the US date from the late 1800’s to the present. Older ones (pre 1950’s) were made by villagers after the rice harvest was done, and show varying degrees of skill. They were made primarily in Shekwan, in South China, and usually depict old, scholarly or wise men, usually holding something in their hand to show status or occupation. Many are shown fishing or holding fish, as fish are a symbol of plenty (see the article in Wikipedia). There are a few women, and I have been lucky enough to find one. One very frequent figure is depicted holding a yoke and carrying a large coin and a peach. The coin symbolizes prosperity, and the peach symbolizes long life. One of the larger ones I have actually has the fingerprints of the person who made him on the inside.

Since roughly 1952, newer ones are being produced out of Shiwan. These are readily available, but lack the detail and personality for the most part that the older ones have. That being said, my first mudman was one who is clearly quite new, but I fell in love with him on sight! He cost me a whopping $.50. How could I go wrong?

With that first purchase, my eyes were opened. I started to see mudmen, and found several at yard and estate sales. Most had some damage, but I have paid very little for them, so I really don’t mind. I even found one buried in my garden. Because they are very soft, and made in pieces, many are missing hands and or feet. I guess that this willingness to purchase far less than perfect pieces as well as newer pieces, makes me less than a serious collector. I don’t really care. I am not viewing them as future retirement investment, they bring me pleasure now. As far as how many are enough, I still look constantly. If you see one let me know – I don’t buy every one I see, but if I like it…….. 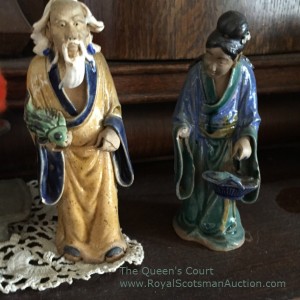 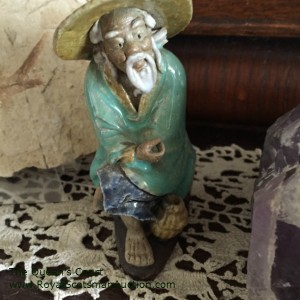 The Following have contributed to this article: